Opening up a free space in Lisbon: one month of resistance, creativity and freedom

It started out as a symbolic occupation, but turned into the collective desire of building up a new island of autonomy and resistance. In “São Lázaro”, the only public squat in the capital of Portugal, art meets politics, creativity flourishes. The door is open: emptiness is gone, life is rushing in


The date: April 25th, 2012. The anniversary of the 1974 carnation revolution and the end of fascism in Portugal. The day in which the country came once again down to the streets to celebrate freedom. And the birth of a new social and cultural self-organized space in Lisbon.

What started as a symbolic occupation, in solidarity with the squatted school and social centre Es.Col.A, evicted days before in Oporto, turned quickly into the collective desire of building up a new island of autonomy and resistance.

“We have an idea in our minds. Evict it if you can!” The five floor building, owned by the city of Lisbon, was left rottening for a decade. “The stairs and corridors accumulated dust and distress. These days, they're filled with excited steps, breathing possibilities. More and more people take in their hands the collective and horizontal management of the space.”

It's spring time and “São Lázaro” flourishes. Art meets politics, creativity melts with resistance. An artistic residence takes one of the empty dusty floors and turns it into multiple installations. A revolutionary choir waves their voices from the balcony onto the city streets. Poems shake up the air crossing candle lights and the sound of a portuguese guitar. Walls become canvas for everyone's expression, be it graffiti, old-shcool murals or watercolour paintings. Films are screened and presented by their directors. Spontaneous jam sessions gather instruments from all corners of the world. Rhythms of Resistance recycle materials found in the building to create contagious samba. Lazarus, once dead, is now raising its fist and dancing like crazy.


The stream of activity proves the urge for free spaces in the city: shared meals, workshops, debates, concerts, performances, exhibitions, rehearsals. A library. A free shop. A study room – where portuguese lessons for foreigners or guided study can be held. A ceiling for travellers passing by Lisbon and people in need. An open door. 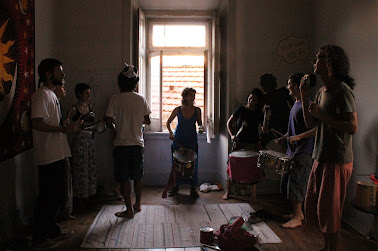 “You can't evict an idea”
Few would predict it, but now here we have it: squatting as a hot issue in the portuguese public opinion – and a threat to power. All thanks to one remarkable project: a group of people squatted an abandoned public school in Oporto, transforming it into a unique social centre, and resisted for a whole year until a brutal eviction last April. The action was aired on TV and indignation spread: the slogan “you can't evict an idea” turned national. On April 25th, revolution day, Es.Col.A was reoccupied by two thousand people – to be cowardly emptied and partly destroyed by the municipality the next morning. In Lisbon, São Lázaro was born.

If four decades ago, in the aftermath of the revolution, Portugal experienced a wave of land, house and working place occupations, a rather conservative catholic people would keep taking a dim view of squatting. Except for some remarkable exceptions, squats in Portugal tend to last no longer than a heroic couple of days.

Yet, the amount of abandoned houses screaming for life is stunning – and constantly on the rise. With urban populations enslaved to pay their bank for their brand new house in their brand new suburb, construction companies' owners and corrupt politicians get rich while the historic centres languish. Here's the country which rebuilds less in the whole Europe. In Lisbon alone, we're talking about 4.700 abandoned buildings. Or squatted by pigeons.

But when people turn shared dreams into a common project, a shocking problem can turn into a contagious opportunity.

Confronting the bureaucrats
“Better sealed than occupied – this seems to be the last argument of a power that managed to empty the cities of their own inhabitants, pushed to the suburbs or out to the street. In this day of freedom, we say no tolerance for this urban re-qualification process, which through the misery of the many builds up mansions and hotels for the few.” The manifesto was handed out in São Lázaro street.

This migrant and working class neighbourhood is living its biggest transformation in recent history – a re-qualification project undertook by the municipality, a gentrification process to attract more tourists and wealthy people. “We are the ethnic and cultural diversity your programs talk about. Your 'multiculturalism' is nothing but a marketing strategy to sterilize our streets and sell hour homes for higher prices.”

While confronting a rather authoritarian city hall, the squatters saw for the first time the police and the municipality obeying their own laws: few days after the occupation, the police came to São Lázaro to surprisingly hand out a notification for abandoning the building, instead of using their guns to kick people out right away. Yet, one week before the occupation, and days after the eviction of Es.Col.A, the city had changed the legal period for staying in an abandoned municipal building – from 90 to 10 days. This procedure was found to be illegal and, one day before the awaited 'knock knock' by the cops, the squatters took it to court and managed to stall the eviction. For now.

For the city hall, there is no way São Lázaro can go on, and the eviction can still happen at any time. Helena Roseta, a supposedly progressist independent lady in charge of housing in Lisbon, picked the most revealing words: “Every day I evict poor families. This would be a huge precedent, i cannot handle this group differently from those families.”

“You don't solve housing problems sealing and spanking”, São Lázaro's assembly answered. “The right to be an owner will never big bigger than the right of having a ceiling, for whatever purpose. These are words we once heard from you. Just that now they came out of the paper and took the streets.” 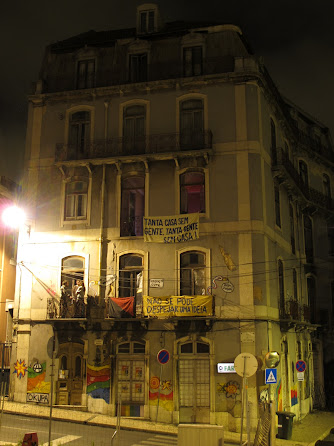 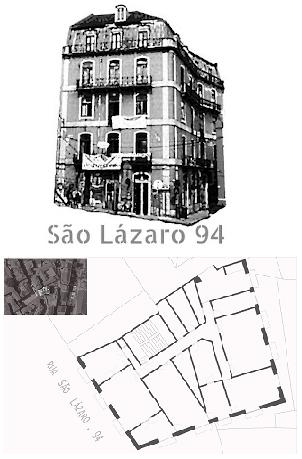